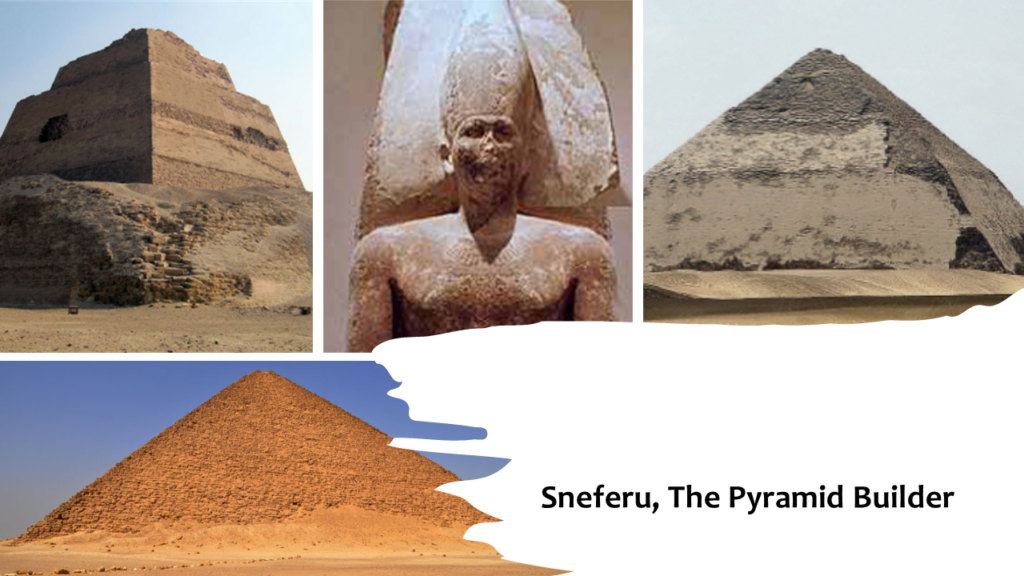 The ancient Egyptians may not have sent rockets into orbit like Musk, but they certainly pierced the sky with enduring wonders in stone.

What name comes to mind when you think of the pyramids? Perhaps Khufu (Cheops) builder of the Great Pyramid? What about great King Sneferu? He’s an interesting fellow –and the most innovative and prolific pyramid builder of all times.

His son Khufu may have built the largest one – but Sneferu built many.  At least three enormous pyramids during a pioneering 24-year phase of innovation in search of the perfect form. He – not Khufu – invented the true pyramid in and around 2600 BCE. Along with a few smaller pyramids in his spare time.

Sneferu’s first try was in a remote area near the Fayoum we call Meidum. Unfortunately, this one, collapsed, either over time or likely in antiquity. Didn’t get the engineering quite right. I was at Meidum last in August 2021. The first three photos (right) show my journey up to the entrance down the corridor and way up a ladder to a fascinating “corbelled ceiling” burial chamber – another Sneferu innovation. 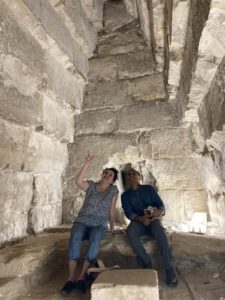 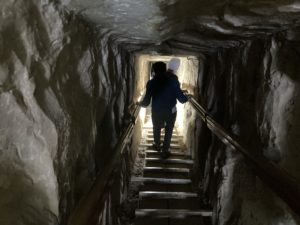 Even before Meidum was complete, he had moved up north to Dashur (just south of Giza) where he began construction on pyramid number 2, the first true geometric one. Unfortunately, he started with an ambitious angle of 60 degrees, which he corrected halfway through to 43 degrees (and no foundation on the sand). Disaster struck – it slumped. Voila la Bent. 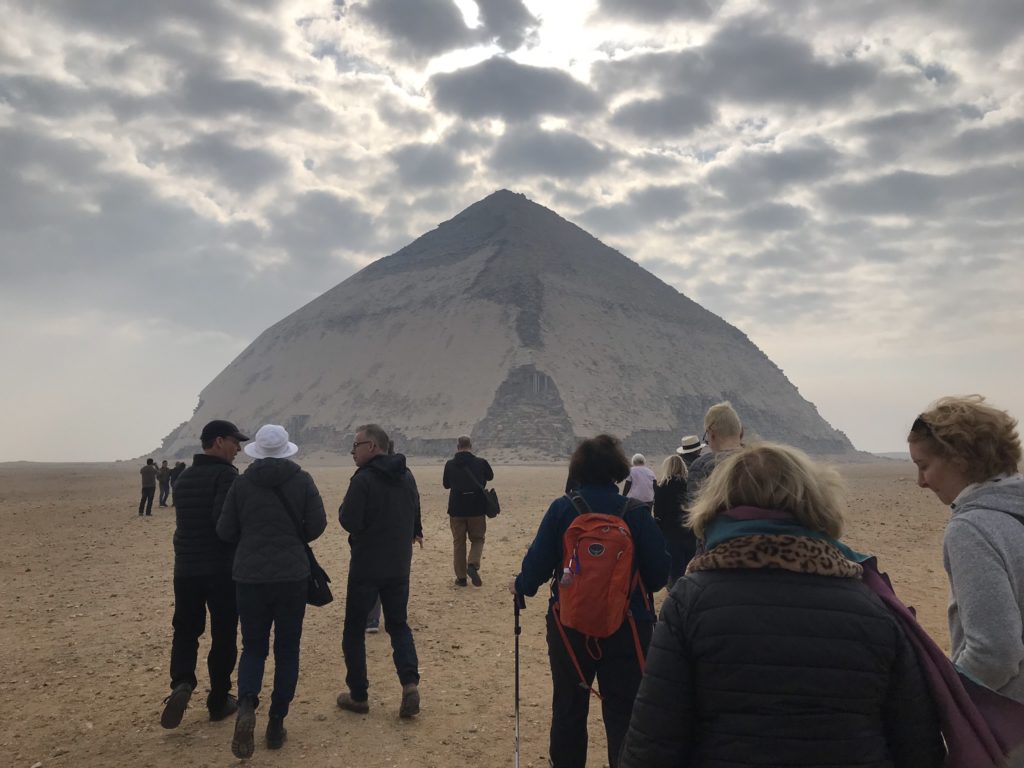 Finally, in the 30th year of his reign, he got it right. He erected the beautiful red or north pyramid – the first successfully built true pyramid. Not that much smaller, in fact, than the big pyramid of his son Khufu. 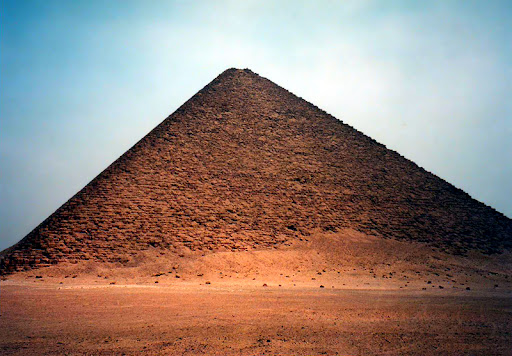 Snefru was generally considered a “beneficent king” as we know from a Middle Kingdom source. According to another one, he rather fancied the young ladies. He was particularly fond of rowing on his pleasure lake with 20 scantily clad virgins. Here is the quote, translated from the Westcar papyrus.

“Let me be brought 20 oars made of ebony decorated with gold, their handles made of seqab-wood, covered with dja-am (white gold). Let me also be brought 20 virgin maidens with perfect bodies and well-developed bosoms, compassed with braided hairs. Let them be draped in nets after they have disrobed their clothes.” All things Sneferu wished are done. And so they row to and fro and Sneferu’s heart is gladdened when he sees them.

But that’s a whole other story. 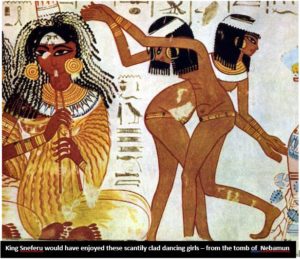 Join me, Laura, to hear wonderful stories and secrets from pyramid building past during Egyptian Pyramids: Meaning Making and Metaphor, my 6-week class this January. 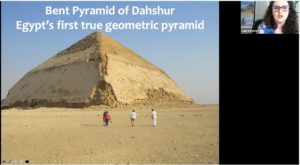 In it, we’ll travel to Egypt virtually together to delve into everything about the Great pyramids that continue to confound us all: 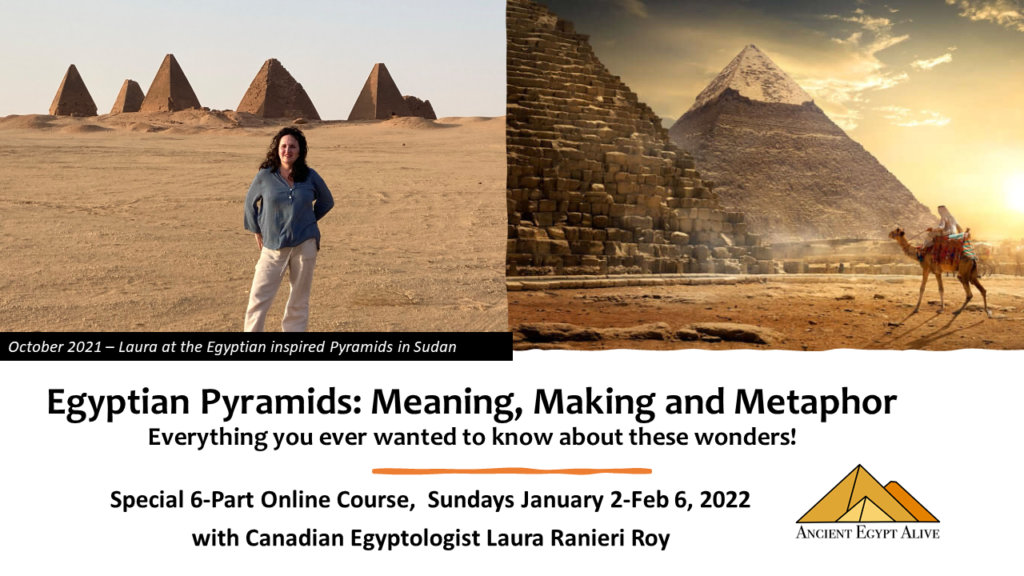