Egyptian Sphinxes: Beyond the Avenue

Unveiling the mystery behind the mythical beast, triumphantly restored for the “Avenue of the Sphinxes” reopening:

This week, the world’s spotlight shines on the grand re-opening of the processional way in Luxor – the great avenue and now world’s largest open air museum. Many questions have now been raised about the avenue and also Sphinxes, as a form and a symbol.

What do they mean? How far back in history do they go? What are the most famous examples in Egypt? What is the history of the Avenue of the Sphinxes? Well, let’s begin with the avenue itself since it is timely. 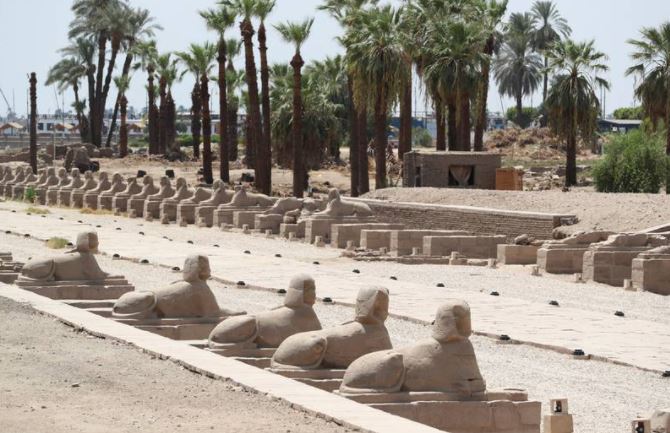 Avenue of the Sphinxes: a processional way for the Opet Festival

The Avenue of Sphinxes is a two-kilometre processional way on the east bank of Luxor lined with more than 1050 sphinx statues. It connects Karnak temple in the North and Luxor temple in the south, known as the southern palace.

In ancient times, the spotlight fell on this avenue at the beginning of inundation season during the great Opet festival. Opet was a wonderful celebration of rebirth and renewal (of gods, king, and land) celebrated with a magnificent parade of divine barques of Amun, Mut, and Khonsu between the Temples. Music, dancing girls, delicious food and all the people of ancient Waset out for a good time, just maybe a chance to catch a glimpse of a god or receive a divine oracle!

Construction of the avenue began near the beginning of the New Kingdom  – possibly even earlier. Continually rebuilt and expanded by successive kings, the avenue was completed 1500 or so years during the reign Nectanebo I (380-362 B.C. 30th dynasty) the last native Egyptian king of Egypt. (Alexander would arrive in 332 BCE – and the Ptolemies would take over).

The great road, however, was buried under layers of sand for centuries. In more recent years, garbage has been a big issue (especially after the revolution with no tourists) For example, this stretch of the avenue leading to Mut temple. We assembled a small makeshift team to clear it (did what we could with garbage bags and some local youth) in 2015. (see our photos below) 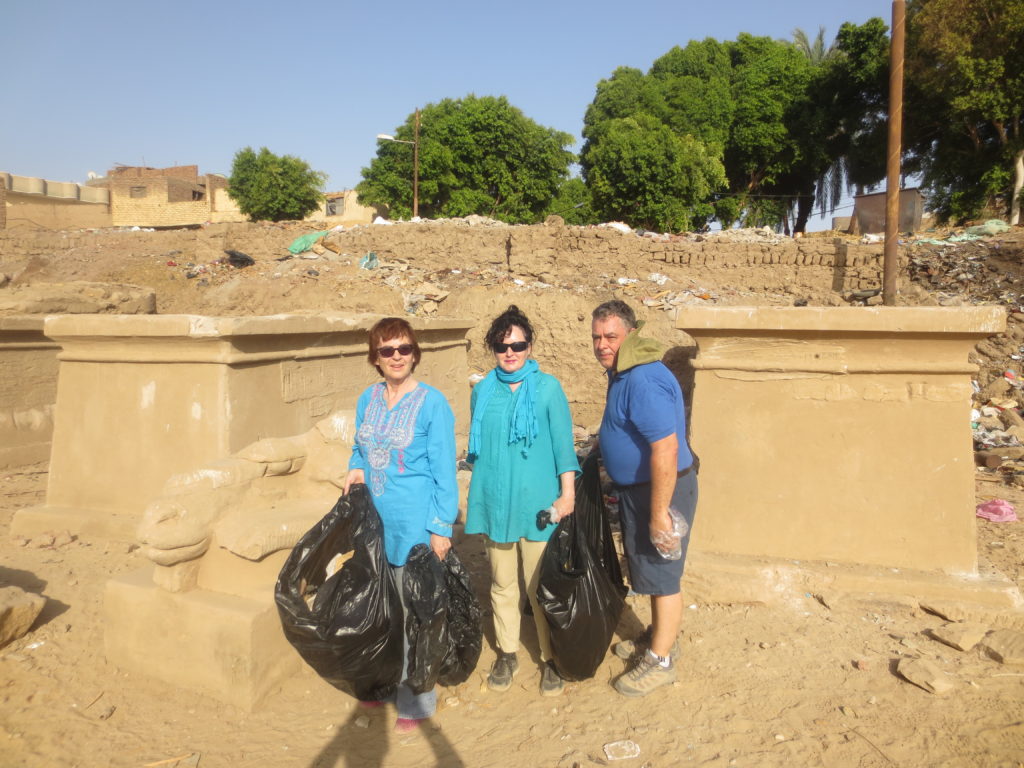 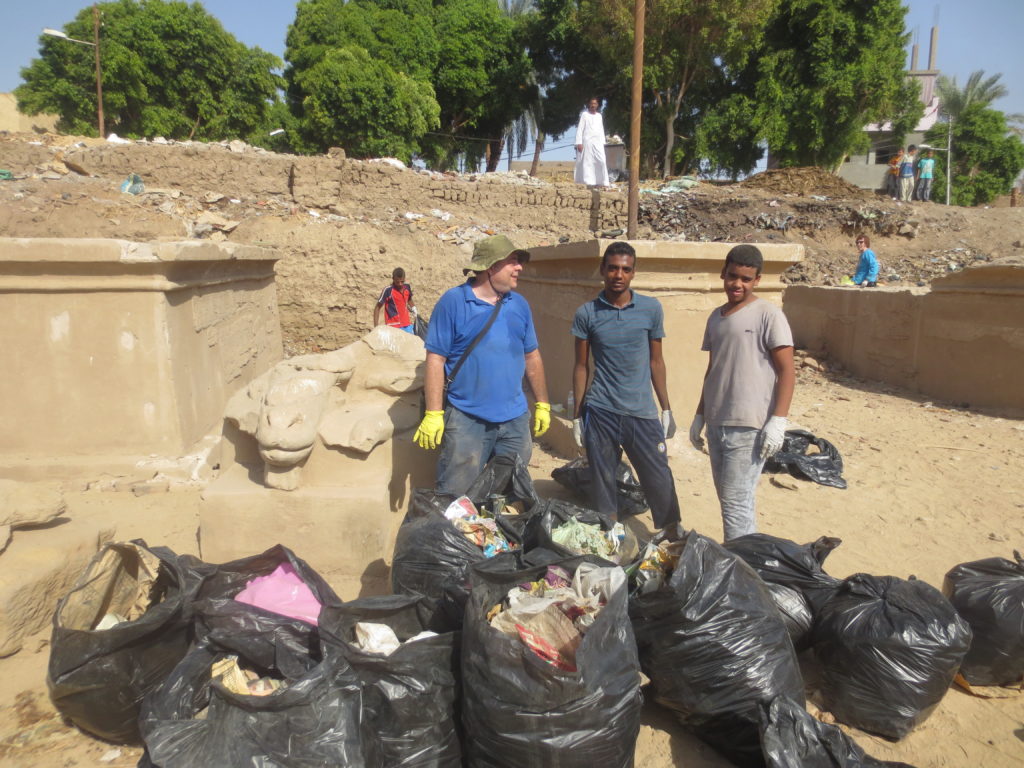 Most of the original 1,057 statues in the avenue have now been recovered.

There are two main types of Sphinxes along the processional way: 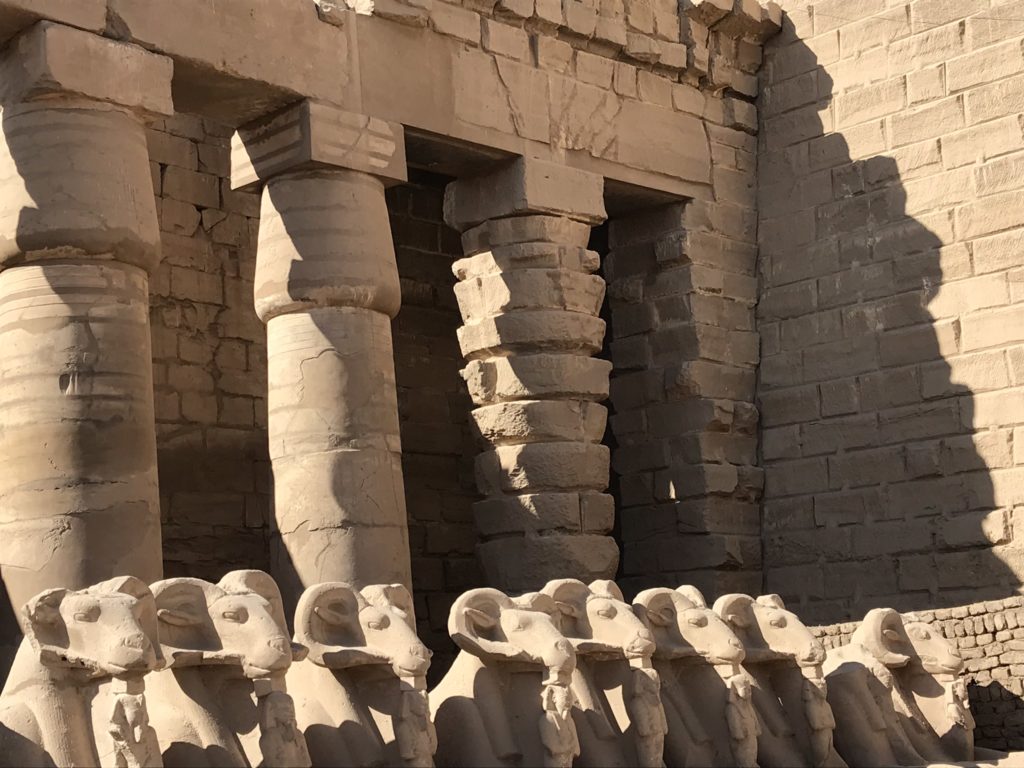 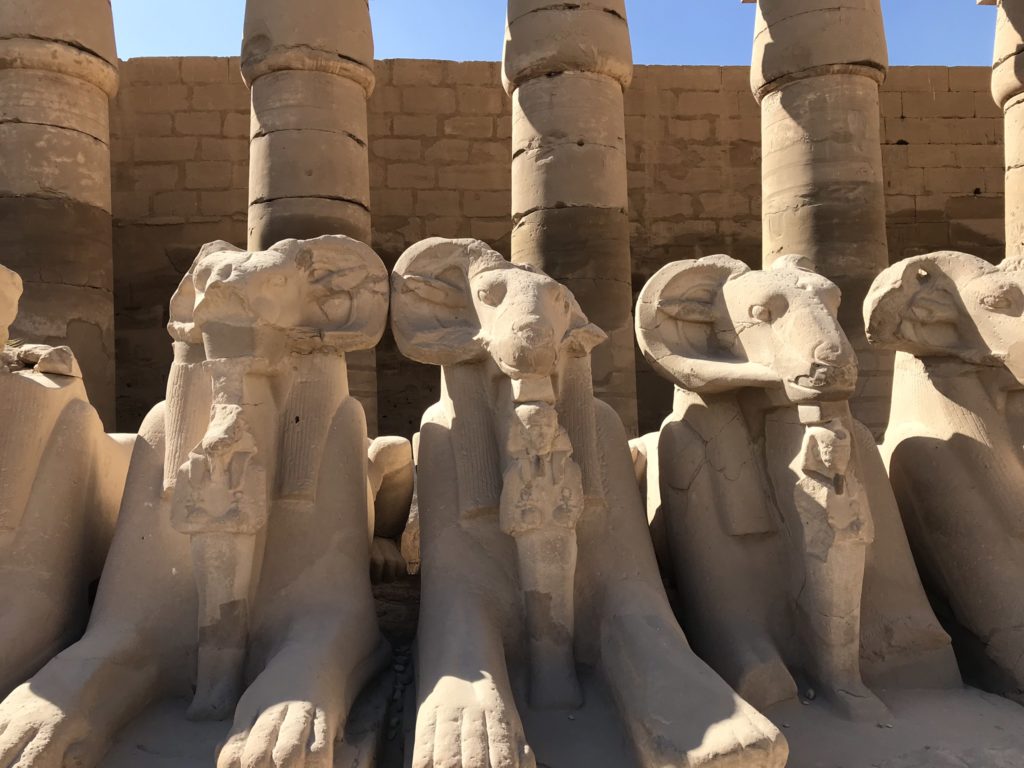 Riddle of the Sphinx: The Greek story inspired by Egypt

We have all heard of the riddle of the Sphinx. But understand that’s a Greek story, not an Egyptian one. It was, however, inspired by the much older Egyptian sphinx. 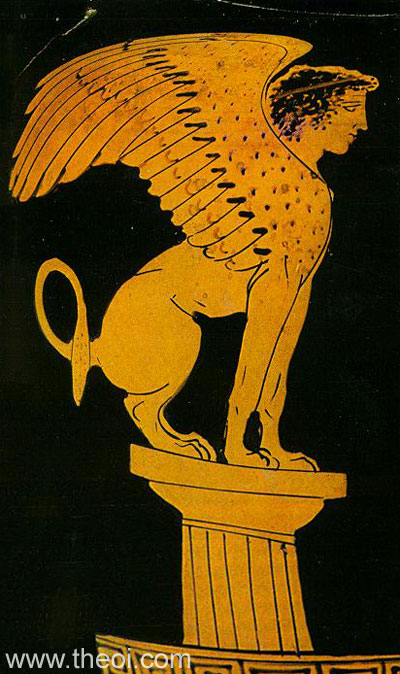 The myth concerned a female monster with the body of a lion, the head and breast of a woman, and eagles wings who terrorized the people of Boeotian Thebes for some crime against the gods. She demanded the answer to her riddle and would devour those who did not answer correctly.

“What is it that has one voice and yet becomes four-footed and two-footed and three-footed?”

It was Oedipus that correctly answered MAN (crawling on all fours in infancy, walking on two feet as an adult, then leaning on a staff when old.) The sphinx thereupon tossed herself off a mountain in despair.

The Greeks are always stealing from Egypt. But to their credit, they creatively make Egyptian inspiration their own! The much older Egyptian mythology is different. 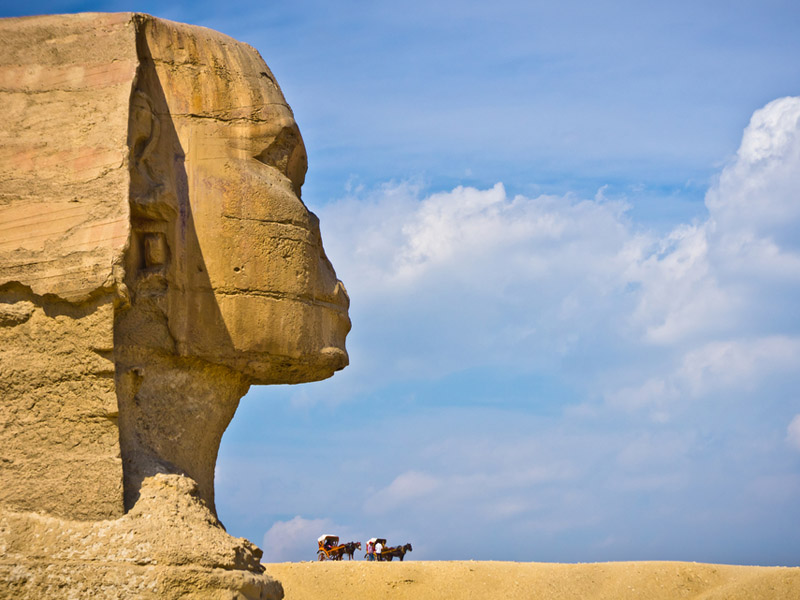 The Great Sphinx of Giza – and the ‘Sphinx’ meaning in Egypt

The power and majesty of the lion fused with the intelligence of man. The part human, part divine nature of the king. A “living image” of the Sun god — the creator god, whether you call him Re Horakhty or Atum. Certainly a great protector of the Pyramid complex at Giza, burial place of 4th Dynasty kings and queens. The Sphinx embodies all these meanings. These meanings – sun god, part human-divine – continued to resonate through the many sphinxes that came after, each king of Egypt embracing this powerful form of statuary.

The Great Sphinx at Giza was built sometime before 2500 BCE, most likely by the King Khafre – builder of the second biggest pyramid whose face it most resembles. It lies at the foot of his causeway leading to the pyramid, beside his valley temple. It even had its own temple next door, where priests and kings celebrated the sun at dawn and dusk.

What happened to the nose? No, it was not target practice by Napoleon’s men.

Likely, it was pried off by a medieval Islamic ruler of Egypt (Muhammed Salim alDahr) seeking to kill (take away the breath of) this powerful pagan god who seemed to control the flow of the Nile!

1. Earliest Sphinxes – before the great one

King Khafre, builder of the second largest pyramid at Giza, was not the direct successor of King Khufu, his father. Older brother Djedefre (the rebel) built a less successful pyramid up at Abu Roash. We think he may have been trying to promote the sun god Ra– even including Ra in his name. Sure enough we found the earliest Sphinx – solar symbol that it is in statue form at his ruined pyramid site depicting his Queen Hetepheres II. 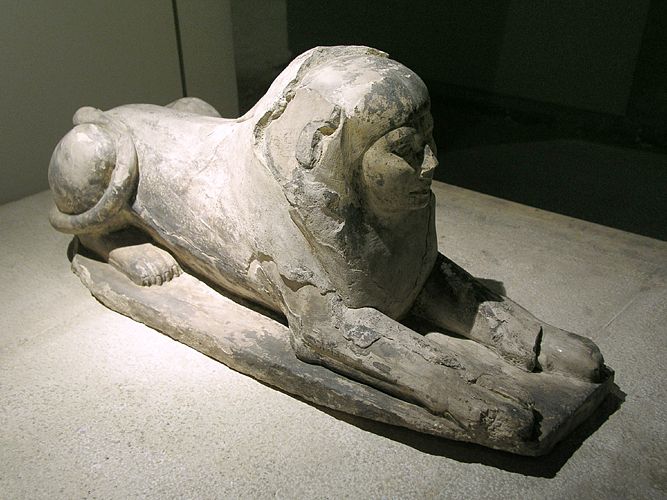 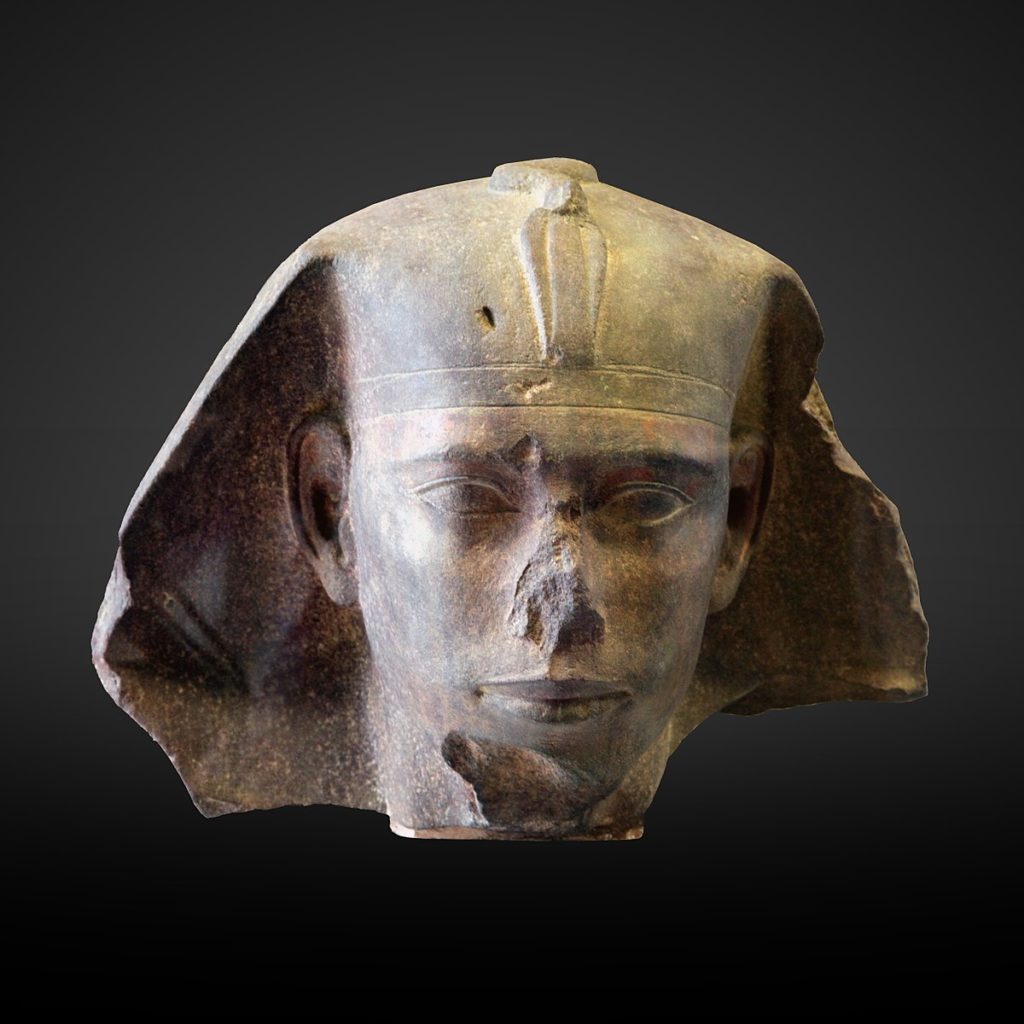 The beautiful Djedefre bust in the Louvre, some feel, may actually have been the head of another Sphinx at Abu Roash. Then there is the double headed king-sphinx we see pictured on these very early ivory wands – predating the Giza Sphinx by 3 to 400 years.

If you were king and came upon a wonderful Sphinx statue, what would you do? Celebrate the ancestor king who built it? Or simply change a cartouche or two and make it your own?

The great Middle Kingdom Sphinx of Amenemhat II, (c. 1900 BCE) that greets you as you enter through the passages of the Louvre is a great example of this. Found up north in Tanis, it was appropriated by both Merenptah (19th dynasty) and Shoshenq (25th dynasty). 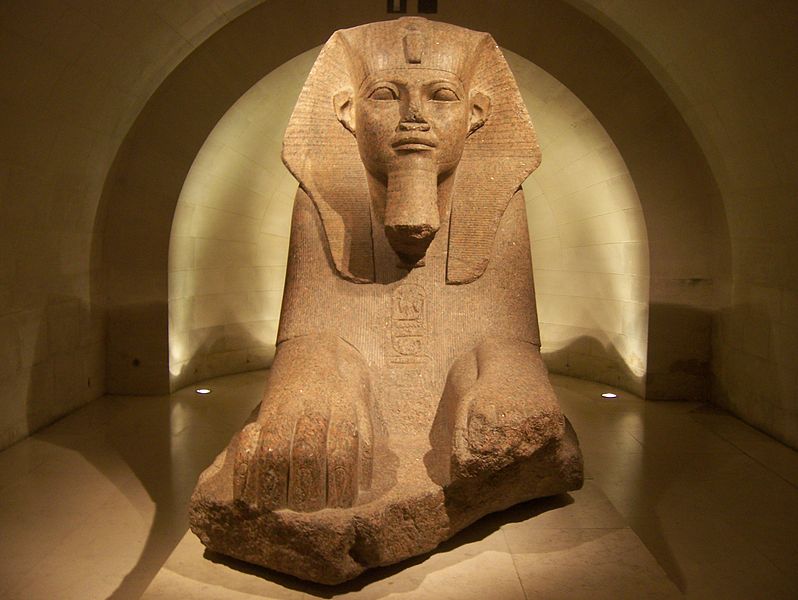 The great woman who would be queen in the 15th century BCE, Hatshepsut was a great builder – and a great lover of the Sphinx form. You can visit her wonderful galleries in the Met Museum where scores of statuary of her are displayed, including sphinxes.

The Sphinx of Hatshepsut however in the Egyptian Museum, Cairo (Tahrir) is a true masterpiece. You can even see the feminine elements shine through this traditionally male image of lion-king-sun god. 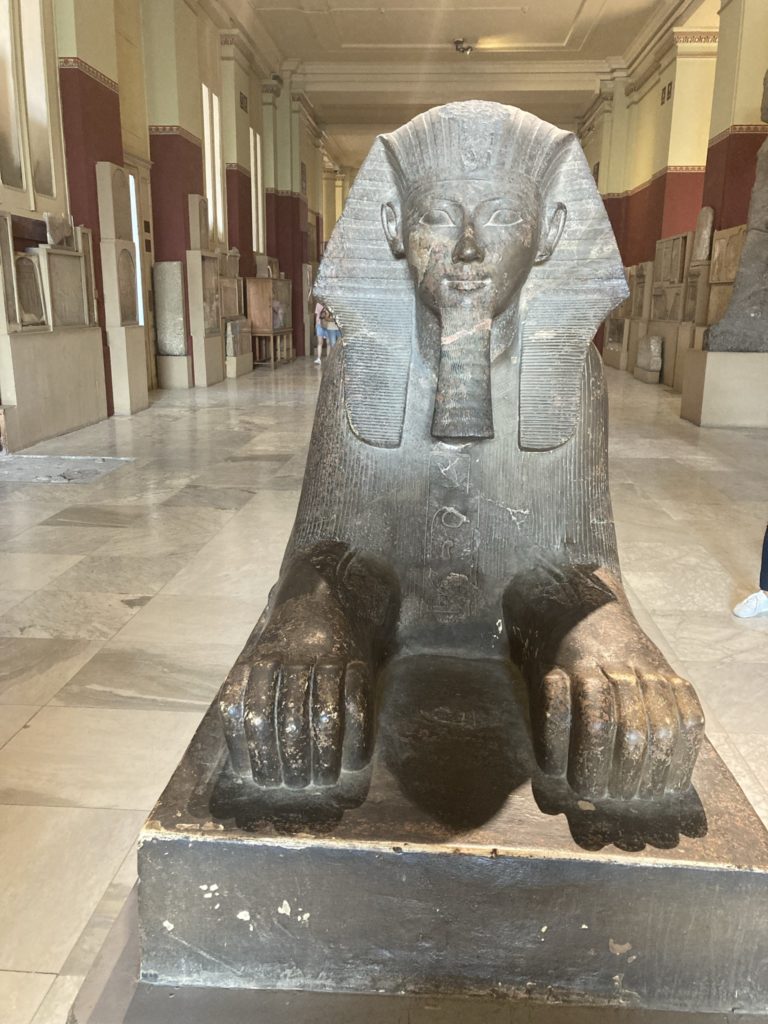 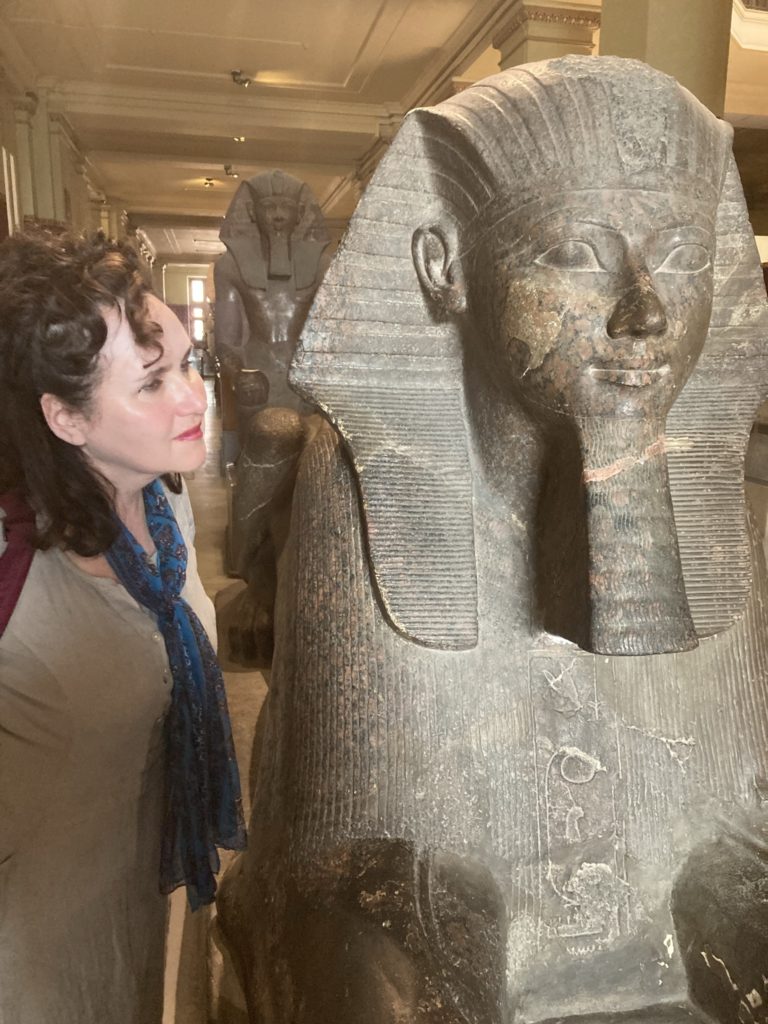 4. Sphinxes of the Amarna period: Akhenaten and Tutankhamun

Akhenaten’s Amarna revolution dramatically changed the art, culture and religion of Egypt – for one single generation – in the 14th century BCE. So many old forms were tossed out  – but the traditional image of Sphinx, was embraced heartily. Both by himself and his son Tutankhamun who had a lovely Sphinx erected in a courtyard at Karnak temple. Who knows what amazing Sphinx statuary of himself and Queen Nefertiti may have existed before the demolition of their city. The Amarna excavators today, indeed, have found some fragments that show sphinxes may have been alive and well at Amarna. And certainly there are great reliefs remaining. 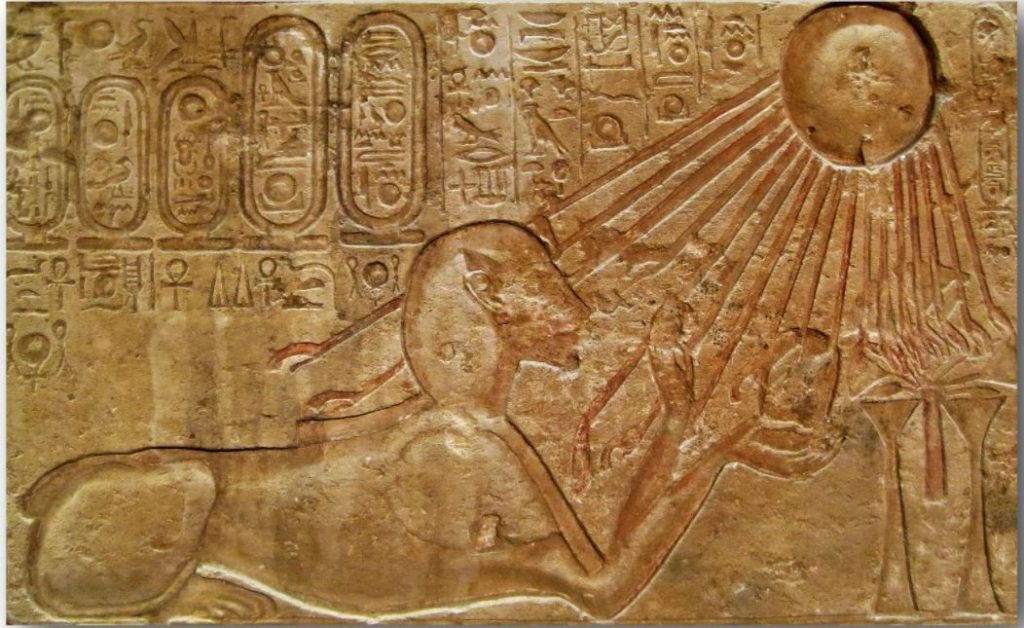 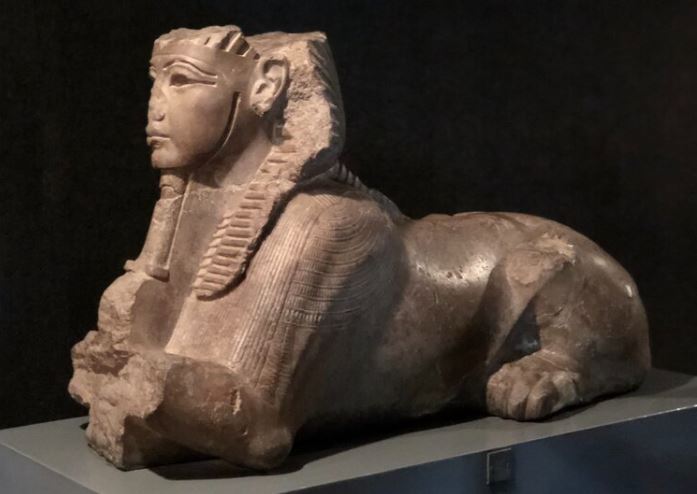 The Nubian kings ruled Egypt in the 25th dynasty – 7th century BCE. They were revisionists, romantics who sought to restore the grand old forms of the glorious Old and New Kingdoms. It’s no surprise that Taharqa commissioned a wonderful sphinx of granite gneiss. Found in Kawa in present day Sudan, there is no mistaking it’s distinct Nubian style 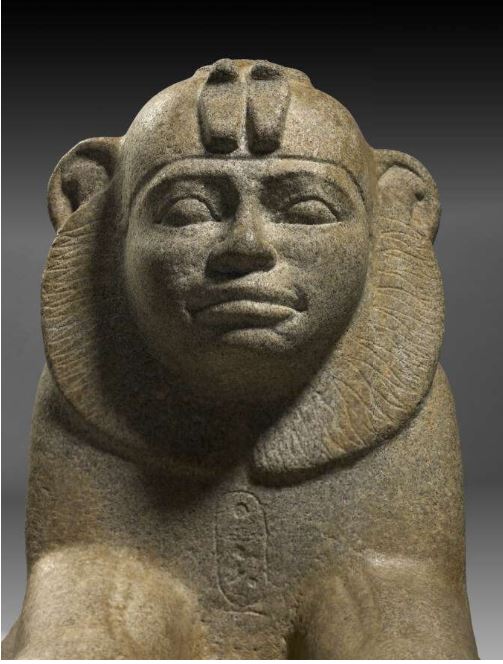 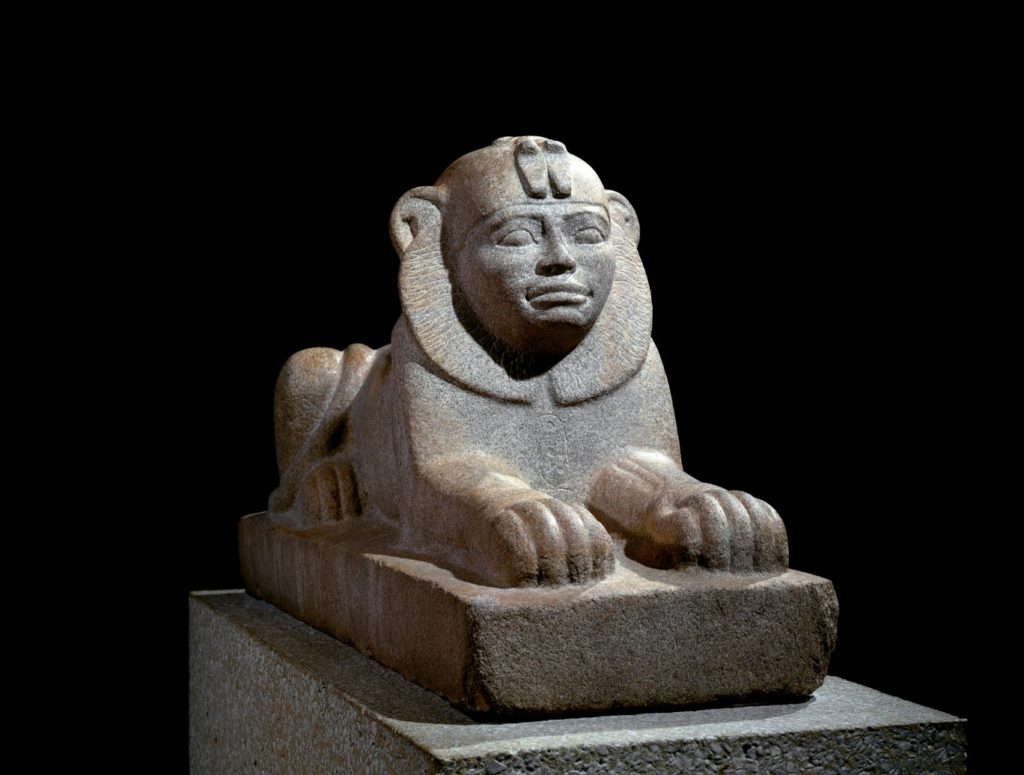 Love to travel to Egypt with us on an enriched small group tour to see the Pyramids, Temples and the Avenue in 2023 or 2024? Interested in learning more about the Great Sphinx and pyramids?

Our 6-week Pyramids course is coming this January – online. 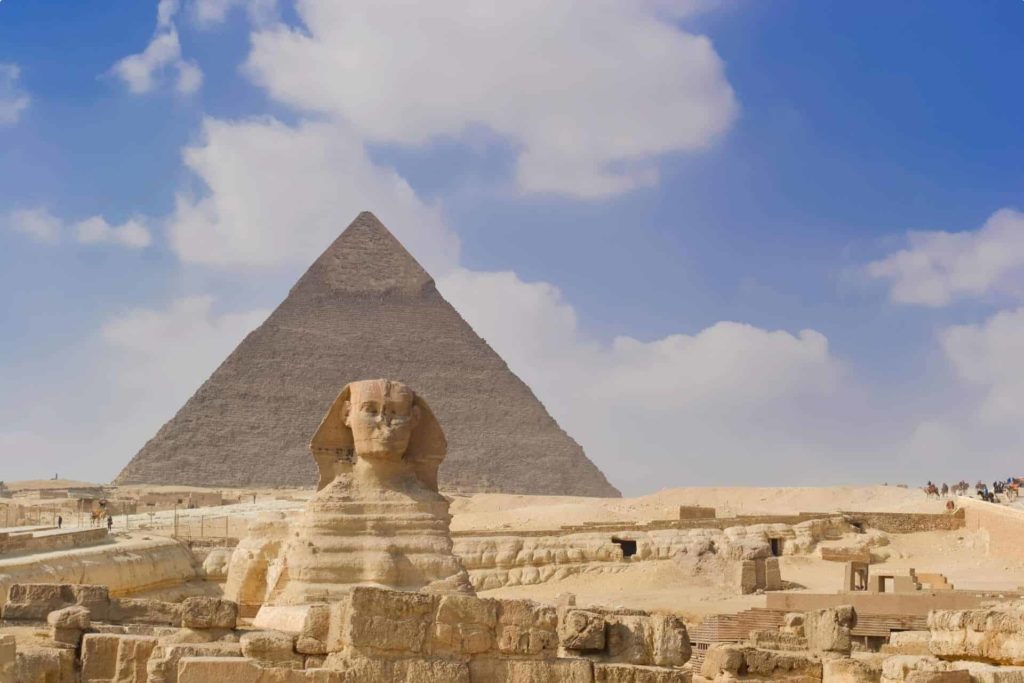