A Few Great Greeks in Egypt

by Amtul Jabeen and Laura Ranieri

‘You Greeks are children infront of us’, said an Ancient Egyptian Priest to a Greek in 6th Century BC. His words prophesied the beginning of the great civilization of Greece, and the domination of Greeks in Egypt from 332-30 BCE .

The Greeks were so entranced by the glory of Ancient Egypt. They soaked up inspiration and brought ideas about gods, art, religion and society back to Greece to build an incredible civilization for themselves. Not only that, Macedonian Greeks came back to Egypt, once more. This time to conquer it – and begin the 300-year Ptolemaic dynasties.

Let’s look at a few fascinating Greeks in Egypt 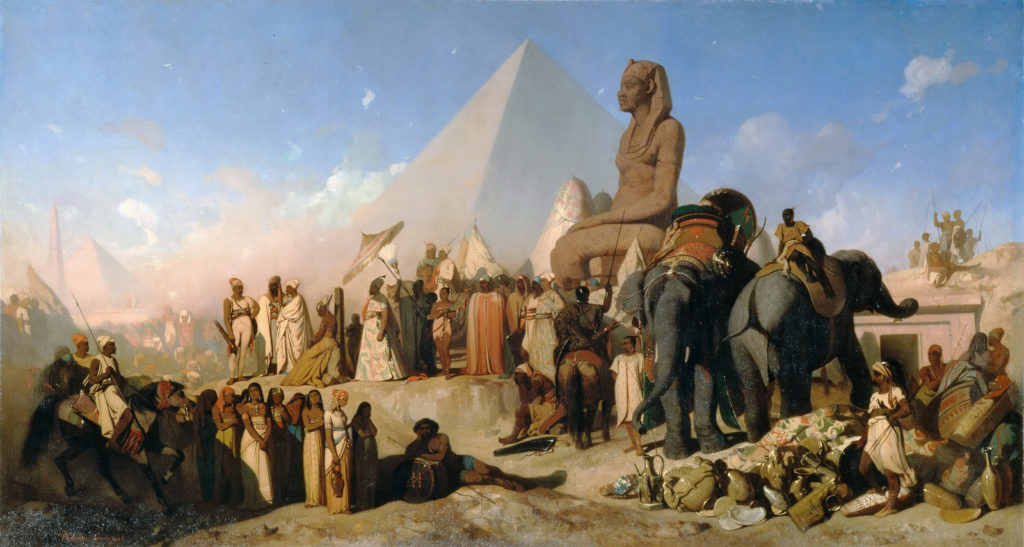 When it comes to amazing Greeks, few can top Alexander, albeit Macedonian. He was one of the most magnificent figures in all history.

Nothing prepared Alexander for what he was to witness in Egypt when he came to conquer the land of the Pharaohs. It was 332 BCE. After defeating the Persian king Darius, Alexander stepped foot in Egypt and immediately developed a deep-rooted respect for the Egyptian Gods. He whole-heartedly embraced their culture.

Alexander travelled west 350 miles across the western desert to the Oracle of Amun at Siwa Oasis in 331BCE. There, the oracle proclaimed him divine – and he was crowned here as the Pharaoh of Egypt. 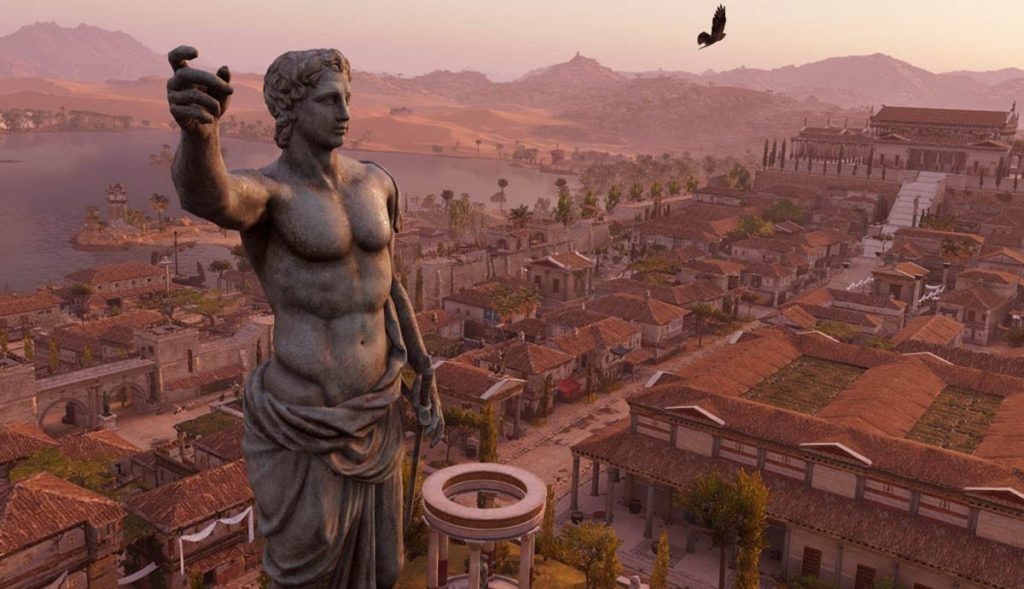 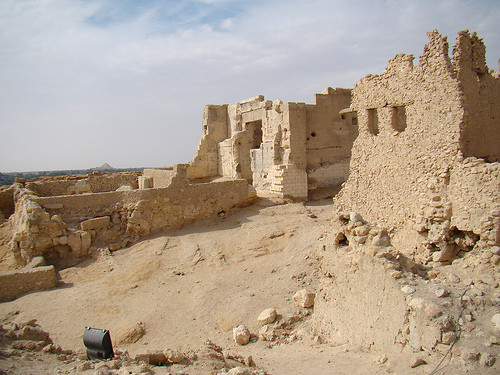 Alexander’s greatest accomplishment was the founding of the glorious city of Alexandria, located on the Mediterranean at the mouth of the Nile. He was inspired to build this city by a line from Homer’s Odyssey – spoken to him in a dream: There is in front of Egypt, in a sea with many swells, an island called “Pharos”.

Alexander remained as the Greek Pharaoh of Egypt from 331 to 323 BCE. He was also given the title of Son of Amun. He then carried on east – with visions of world-domination, fully believing in his invincibility based on the words of an Egyptian Oracle, “You are God”. Sadly, Alexander died at age 32 in the palace of Nebuchadnezzar in Babylon of disputed causes. He is, as we say, a true legend and perhaps the greatest military leader and conqueror of all history. 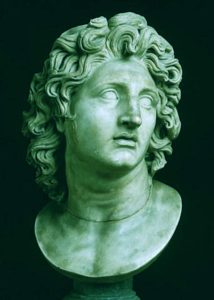 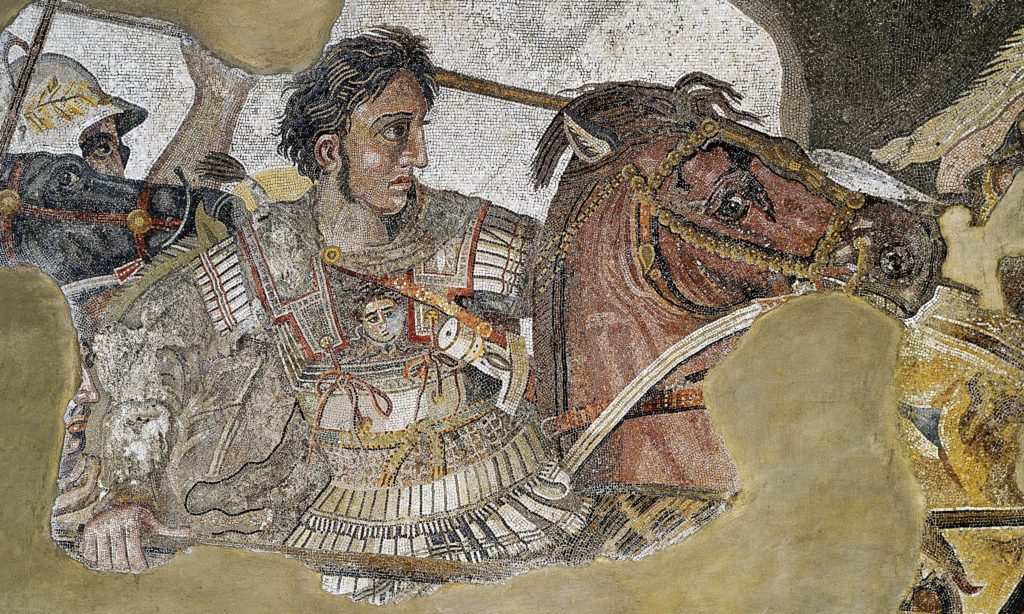 After Alexander’s untimely death in Babylon, his top general and ‘right hand man’ Ptolemy Soter came back to Egypt in 304/305 BCE and crowned himself Pharaoh of Egypt. With that, began the Ptolemaic dynasty of Greek rulers in Egypt – 275 years of transformation, iconic building projects and a fusion of Greek and Egyptian ideas.

Construction began in earnest on glorious Alexandria;  Ptolemy I saw the wisdom behind the construction of Alexander’s dream city. He swiftly moved the Egyptian capital officially from Memphis to the brand new city which would quickly become a centre of science and learning. Alexander the Great, in fact, wanted Alexandria to be the literary center, and the Great Library of Alexandria was started under Ptolemy I.

Ptolemy personally sponsored the great mathematician Euclid. He found Euclid’s seminal work, ‘The Elements’, simply too difficult to study, so he asked if there were an easier way to master it. According to Proclus, Euclid famously quipped: “Sire, there is no Royal Road to geometry.” The Ptolemies ushered in an age of great scholarship and learning in Egypt, but perhaps for the most part were greater leaders than scholars themselves.

Ptolemy made Alexandria the intellectual center of the Mediterranean, with Alexandria’s massive library and museum. The library contained thousands of papyrus scrolls attracting learned men of literature and science from all over the Mediterranean.  Euclid and Archimedes were among these great thinkers.

Alexandria Egypt quickly became the center of Hellenistic culture and learning. Ptolemy began the construction of the Pharos, a lighthouse (to be completed by his son Ptolemy II). The Lighthouse of Alexandria was a massive structure of three stories with a statue of Zeus at its crown. A beacon was visible for miles and was lit day and night. It became one of the Seven Wonders of the ancient world. After Ptolemy died in 282 BC, his descendants would rule Egypt for nearly 300 more years — until the coming of the Romans. 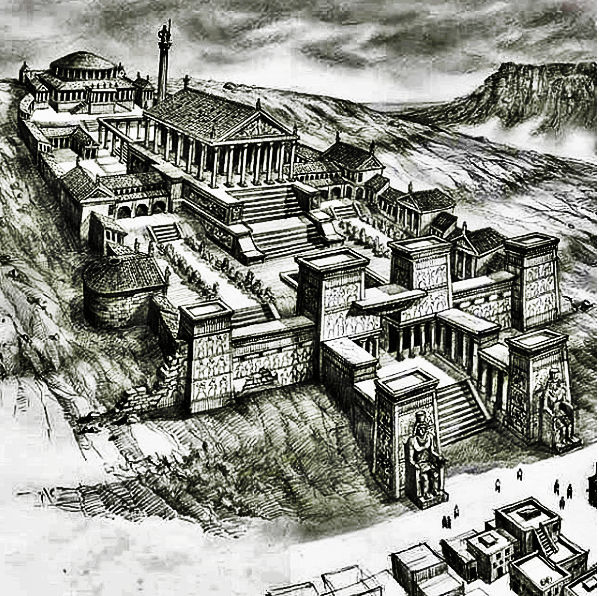 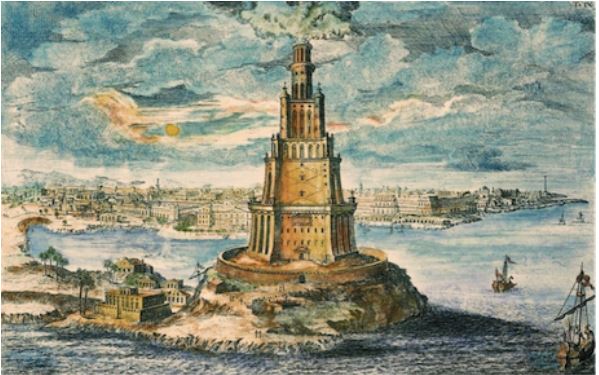 We all know about the great Cleopatra VII – but what about her dad? He was an interesting character ruling during a troubled period of high taxation and Roman power. Ptolemy XII Auletes (which meant ‘the flutist’) was one of the last kings of the Ptolemaic Empire in Ancient Egypt ruling from 80 BCE – 51 BCE. He was known for his love of playing the flute in Dionysian festivals.

Auletes had a very different strategy for ruling Egypt than other Ptolemaic rulers. He depended so heavily for governance on Rome, he turned it into a client kingdom. He nearly bankrupted Egypt by paying dearly for favour and protection from Rome.

Soon before his death, he chose his famous daughter Cleopatra VII as his coregent. In his will, he declared that she and her brother Ptolemy XIII should rule the kingdom together. To safeguard his interests, he made the people of Rome executors of his will.

One of the most notable architectural sites ever built and resplendent today is the beautiful Dendera Temple. The inner chambers of the current structure were largely built by Ptolemy XII and the construction was completed by Romans, notably Tiberias (that stunning hypostyle hall with the Hathor sistrum pillars.) He also made a mark on Edfu temple – Here he is smiting enemies for the God Horus! 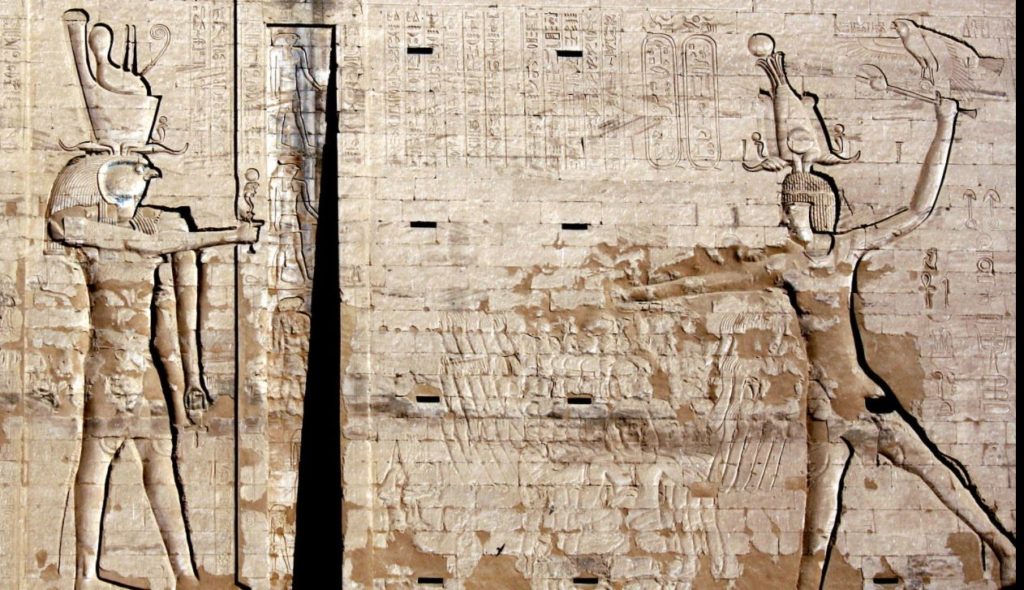 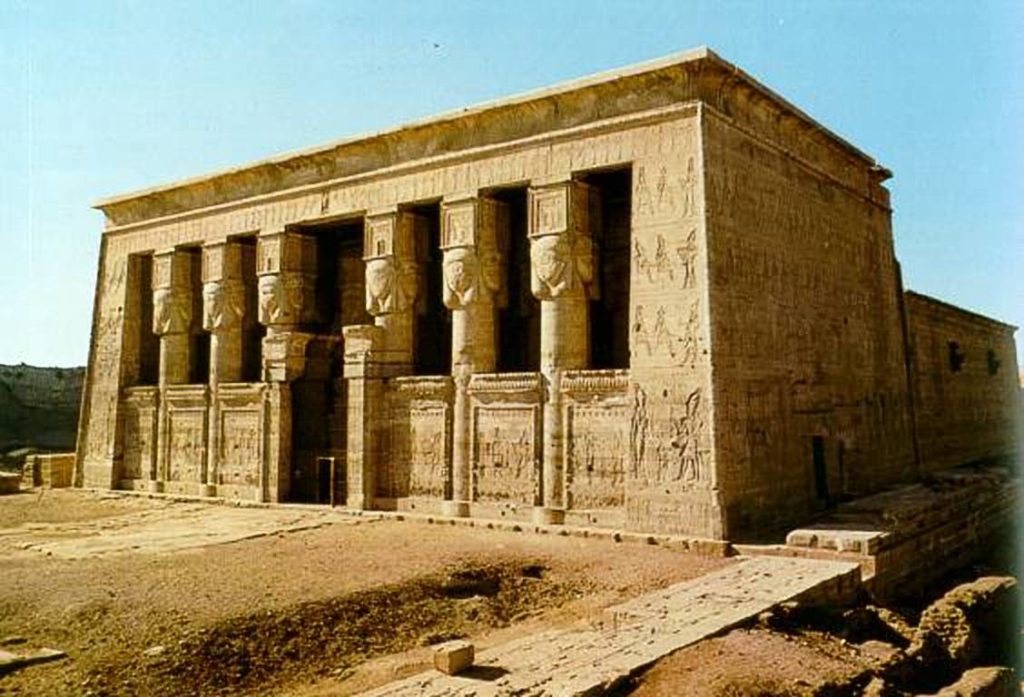 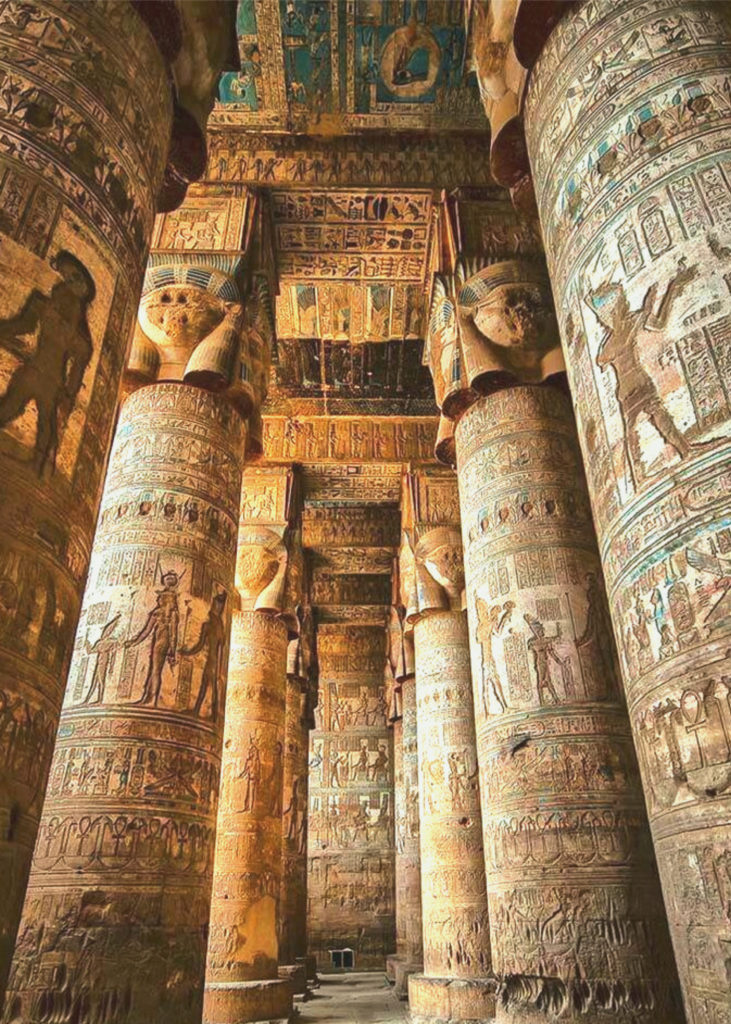 The word ‘History’ is Greek for ‘Inquiry’. And Herodotus was passionate about inquiring about the wonders he beheld when he toured Egypt in the 5th century BCE. He published ‘The Histories’, a compilation of historical events with the entirety of Book 2 being dedicated to Egypt. Herodotus was a Greek from Halicarnasus (present-day Turkey) who travelled through Egypt in 450 BCE and wrote down everything he learnt. He is widely considered the first writer to treat historical subjects using a method of systematic investigation. He spoke to the priests in the temples, the common folk, and anyone who was willing to tell him tales about the Pharaohs, the Kingdoms and this culture so exotic to Greeks.

If it wasn’t for Herodotus, we’d never really know the detailed process of ‘Mummification’, the procedure to shroud, embalm and bury the Egyptian dead. Embalming was a competitive business, and the tricks of the trade were closely guarded secrets.

A lot of accounts written by Herodotus were gossipy/hearsay… and many were proven wrong during later research. Some have even called him “Father of Lies” and some of his works have been earmarked as fictitious tales. Nevertheless, it was with Herodotus, that the concept of systematic investigation into history began. He was called `The first called Father of History’ by the famous Roman writer and orator Cicero. 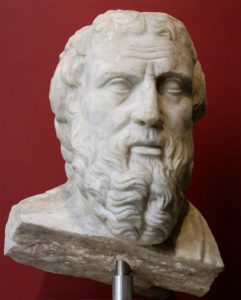 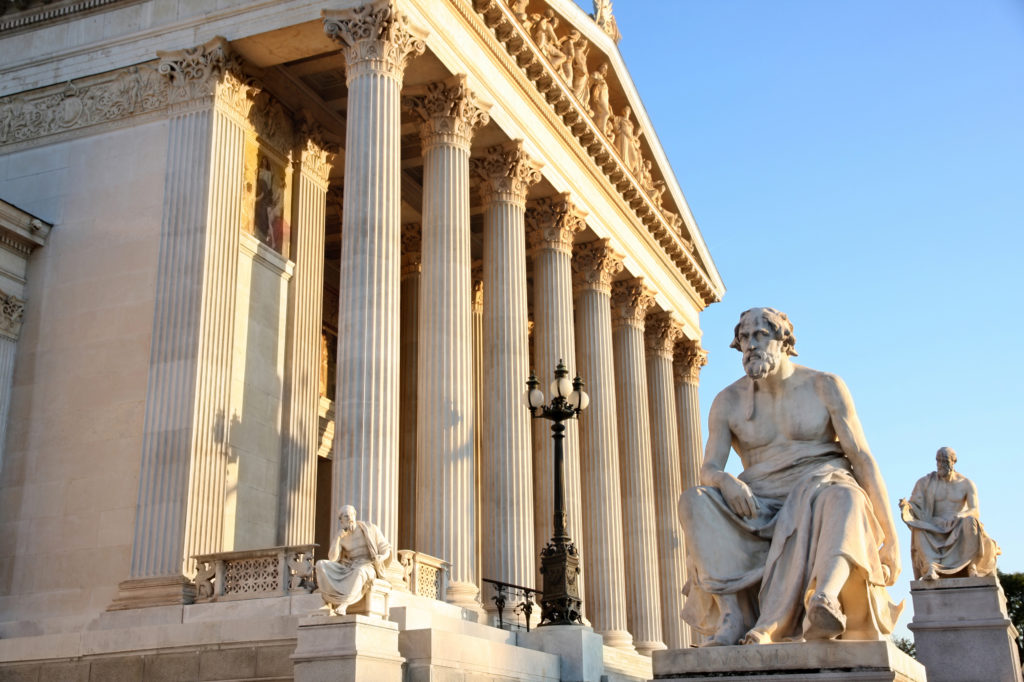 The Greeks in Egypt had a massive impact on the history of Ancient Egypt. They brought interesting ideas and great artists and thinkers, they built exquisite temples, and they gave the ancient Egyptian culture, art and architecture a distinctly Greek flavour.

In the 300 years of the Ptolemaic dynasty overseeing Ancient Egypt, the Greeks turned Egypt into a bilingual and bicultural kingdom. The fusion of the Greco-Egyptian culture resulted in the development and popularity of Egyptian religion, particularly the worship of the goddess Isis in Greece and beyond. 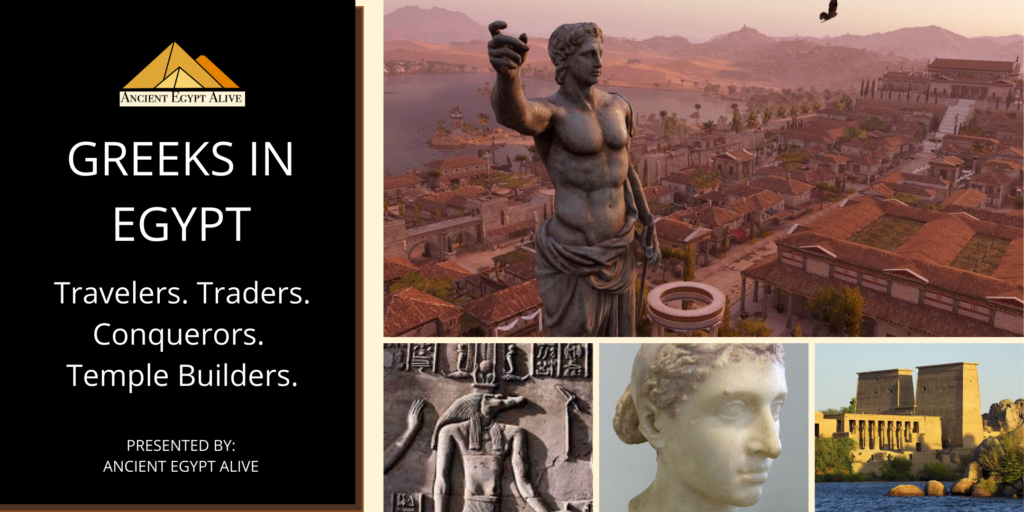